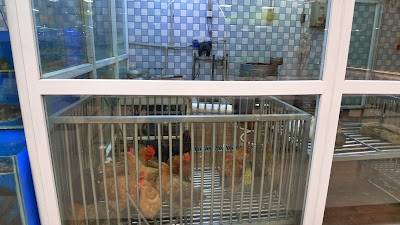 I am only 3 days into properly and officially living in Chongqing so there isn't a whole lot to report on through the fog of jet lag still clouding my mind during the days. BUT, I will say, one thing I am considering to do very soon is pick a chicken (or a duck) at the local grocery store to have freshly butchered for us. I know many (or maybe just some) of you will cringe at this. It seems barbaric perhaps? But, I don't know which is more barbaric, the illusion of the shrink wrapped chicken breast in plastic at your local chain grocery or the acknowledgement of where it comes from? I choose the latter. I do have to figure out if these chickens are jacked up on hormones, and while they weren't uber crowded in their final destination, it does bother me on some level that they have to sit there watching us while we choose their fate. They didn't seem overly large by any means (in fact, they looked like a normal size free range chicken does), so fingers crossed they aren't too tainted. Living in Chongqing, I'm not sure how much choice I will have except to eat less meat if that is the case. Which is fine. 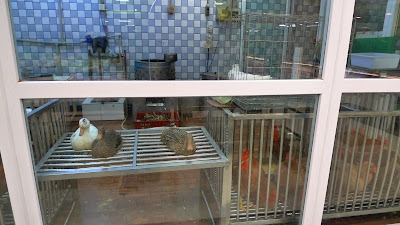 In Chinese Medicine, chicken is gently warming, blood building, and easier to digest than beef if you have a compromised immune system or digestive capability. Here is a recipe I posted a while back for chicken adobo. 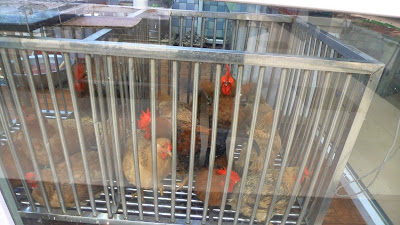 Chicken is often used to make medicinal soups with a combination of herbs, depending on what you want to target. Gou Qi Zi, Da Zao, Dang Gui, Huang Qi, all these herbs and more can be found floating in a simple chicken stock (made with the bones) in most of the restaurants and homes in China. When I was last here in July we had the opportunity to drink one of the most spectacular 8 hour triple steamed chicken stocks with fritillaria bulb (Chuan Bei Mu) and pear I have ever had. That soup in particular targeted lung and throat dryness, which is something I could use right about now as my throat is reacting rather strongly to the incessant smog.

Making chicken stock with herbs is a great way to eat your medicine. Here are a few suggestions for targeted maladies via chicken stock/soup :


*you can link to each herb by clicking on it above and it will take you to a well respected New York City TCM pharmacy (Kamwo Pharmacy) where you can learn more via their herb index
Posted by The Spice Doc at Monday, October 10, 2011