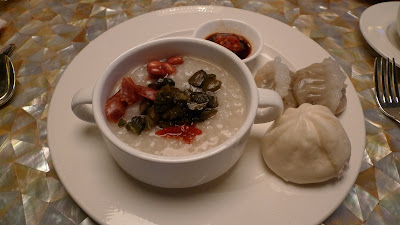 Congee is by far one of the most prevalent examples of medicinal cooking's marriage with commonplace kitchen knowledge in Chinese and Asian culture(s) at large (in Thailand it's Khao Tom, in Japan it's Zohsui or Kayu, in Korea it's Jook/Juk, and so on). Everyone eats it. You learn about it growing up. You learn about it in TCM (Traditional Chinese Medicine) school. They serve it on the street, they serve it in the posh hotels, they serve it at school. You know when to eat it, and what to add to it to cater more specifically to your current needs. 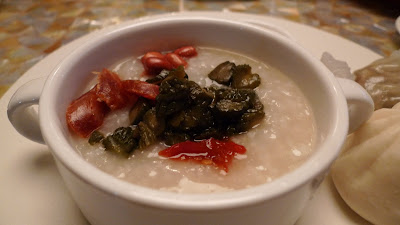 Chicken is more tonic for the qi (energy) and blood. Sweet potato will add to the digestive function. Da Zao (red dates) also come to the aid of the energy and blood. Gou Qi Zi (wolfberries) improve eye function while working on the liver and kidneys. Huang Qi boosts the immune system. Pickled and fermented green vegetables work on the liver and digestive function. A splash of chile sauce opens up the lungs and fights off a cold. Fresh scallions dropped over that hot tasty soup right before ingesting, fights off that cold even more than that chile sauce (or in combination thereof!). Ginger boosts the digestion, combats nausea, warms you up, and fights colds (too). There are endless combination's for congee, in fact so many that Bob Flaws, a well known author and scholar of Chinese Medicine wrote a book called "The Book of Jook" with a whole slew of the different recipes for congee (or in his case, the referenced jook). Call it what you may, it works, and it works well. 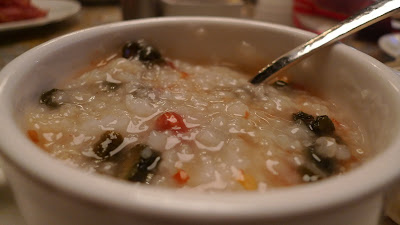 If you're of the digestively compromised faction (of which there are many), congee is your best friend. Eating warm is also of the essence in this case. Your digestion is like a furnace, if you put ice on that furnace, it will not stay "lit" and in turn cook your food for you so it can be transformed into the miconutrients and energy we so love to discuss in biomedical nutritional terms. The base for congee is simple and you can also quite simply just eat the base without anything else. You cook rice in water, at 1 part rice to 4 to 5 parts water, depending on how soupy you would it to be. Bring to a boil on low heat for at least 1 hour. Imagine that it's helping your body by breaking it all down beforehand so you don't have to do so much work once it goes in. Then decide what your flavor is going to be. Is your stomach a little extra sensitive? Add some ginger. Want a little more flavor and energy? Add chicken (cook it with the bone). While I have been enjoying the Chinese congee with a few pickled mustard greens, a sprinkle of salted peanuts, and a splash of chile sauce, I am a huge fan of the Thai Khao Tom, perhaps from growing up there or maybe because it has a little more panache to it.

Here is my recipe (an amalgam of many versions of Khao Tom learned throughout the years), it is great if you're sick, fighting a cold, having digestive troubles, or you just want to eat something clean and simple :

1. Bring to a boil 1 cup rice with 5 cups water, 5 thin slices of ginger, whole chicken breast/or thigh(s) with bone (added immune system boost), 2 teaspoons of tang chai, splash or two of fish sauce (or use 1+/- tablespoon of sea salt if you don't like fish sauce), and 3 whole sprigs of cilantro with the cleaned roots still attached. Cook for 1 hour.
2. Take chicken out around 30 minutes and shred meat off with fork, place bones back in soup to continue boiling.
3. Chop 3-4 cloves of garlic up and fry quickly until lightly brown in sesame oil, set to side in a small bowl.
4. Chop fresh chiles up and place 1 tbspn. in a small sauce bowl with fish sauce and another tbspn. in a small sauce bowl with rice vinegar.
5. Chop up cilantro and scallions, also place in a bowl to the side.
6. Once soup is cooked, serve in a bowl, top with shredded chicken, chopped cilantro and scallion, a bit of crispy garlic, a bit of vinegar and/or fish sauce (depending on your taste and needs).

*Some people add crispy fish, some people cook Khao Tom with ground pork or shrimp, there are again, endless varieties. Have fun playing with it.
Posted by The Spice Doc at Sunday, October 16, 2011

Oh, I really enjoy congee and yep, it is certainly one of those foods that will make you better no matter what happens to be ailing you. I just wish that at the Chinese restaurants in these parts & there are literally thousands (Vancouver, Canada)there were alternatives on the menu to meat based ones. I'm vegetarian plus I do not even know what many of these "strange" (to me) meat items even are! lol. A few places will make it plain, but not usually. Sometimes I would just like to pick some up on my way home. Anyway, when I do have enough time to do my own, I really enjoy it with goji berries, longan and cinnamon. Sometimes a bit of saffron is nice. It works well on menstrual cramps.
Gratitude for sharing this knowledge. Cheers!!