When All You Can Eat is a Potato 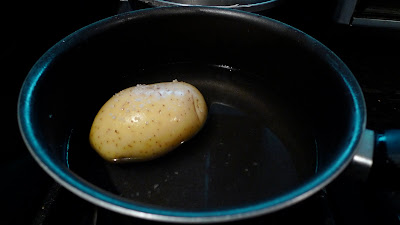 Potatoes are an often underrated healing source of food. After suffering the not so glamorous effects of salmonella (or possibly e coli) poisoning from a contaminated piece of prosciutto, a plain boiled potato with a tiny glaze of good olive oil and a sprinkle of crunchy sea salt was all I could stomach, literally and figuratively. Potatoes are neutral and sweet in the Chinese Medicine world. They are also mildly diuretic, tonify (boost) the digestive function, moisten the intestines, and contain easily accessible carbohydrates when it's difficult for your body to break down food. In addition, potatoes neutralize the acidity in the body and relieve inflammatory conditions whether it be arthritis or in the aforementioned case of gastroenteritis. You can make a juice out of raw potatoes which can be used to reduce all inflammations, applied externally for burns, soothe internal ulcers, as well as establish beneficial intestinal flora while having a concurrent antimicrobial effect.

The potato is regarded as one of the most complete foods as it stands on it's own. Meaning, you can eat a potato (with the skin) and get wonderful nourishment without having to add on extra foods. Potatoes have vitamins A, B6, C, potassium, magnesium, niacin, folate, thiamin, riboflavin, phosphorous, iron, zinc, and enzymes. Because a portion of the potato starch is resistant to digestive enzymes it reaches the intestinal tract intact and has the same physiological and beneficial effects of fiber : lowering cholesterol, increase glucose tolerance, protect against colon cancer, and reduce fat storage. The only thing to be watchful for in potatoes is the solanine which is present in the leaves, stems, sprouts, and fruits (or in potatoes which have been exposed to UV light, which can be plainly seen when they take on a greenish hue). In Chinese Medicine a potato is also considered yin in nature. Yin is all that is liquid and nourishing in the body, versus yang, which is all that is energetic and substantial (this is a very simple explanation as yin and yang theory goes much deeper). 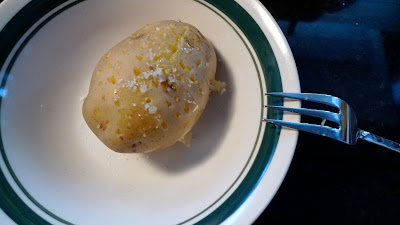 The potato (S. tuberosum) is the fourth largest food crop in value and volume grown in the world. It originated in South America but has now reached every continent. There are thousands of varieties of potatoes, wild and cultivated. The potato interestingly became the MOST important crop in 19th century Europe as it was easily stored, high in nutrition, and cheap to grow. From a medicinal perspective, when choosing your potato, you want to go with the ones with a little more color and an earthier taste. Yukon Gold would therefore beat out a White Idaho. The Colombian papa criolla is above and beyond my favorite, but alas difficult to come by in the U.S. Blue potatoes have the added benefit of boosting blood and ciruclation. Beware of genetically modified varieties of potatoes which tend to be more indigestible due to having been created to only contain amylopectin (making them resistant to pests but in turn ruining the health benefits for us).

Aside from the solanine and genetically modified warnings, a potato is your friend. If you were stranded on an island it might be the best marriage between a vegetable and a fruit in terms of it's nutritional value. And if you are suffering from the effects of food poisoning that has given way to gastroenteritis, the potato is queen. Some other wonderful additions to treating your tender tummy besides the potato are : water with fresh lemon and sea salt, a tablespoon of raw honey taken on it's own, and probiotics (in the form of capsules, miso/fermented products, kombucha, or plain yogurt, you choose). 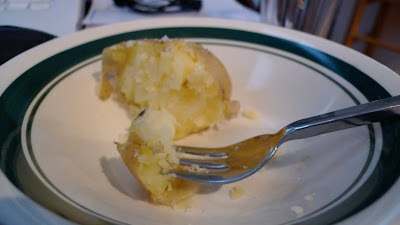 i loved this. so informative and USEFUL. Thank you Spice Doc. I will be juicing potatoes and using them for burns in the future...

I'm just wondering how to effectively wash potatoes :P I'm kinda getting paranoid over the chemicals that they spray on the fields haha!

Good thing you mentioned probiotics. it really saved me when I was taking strong antibiotics. I've read that kimchi and miso are also good sources of probiotics.

@ M. Hopson - my apologies for not having seen your comment earlier. The thing about potatoes is, it's difficult to truly wash off the pesticides and chemicals as with their thin skins, it has penetrated beyond. Therefore, if you can, it's always best to buy organic AND non GMO. And yes, kimchi and miso are great sources of probiotics, as well as being tasty! You can easily make your own fermented foods at home with just some good quality salt, and patience.