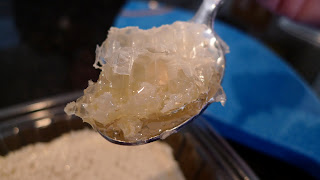 Another year is rolling into it's final days (at least for those going by the Georgian calendar, because in Thailand according to the Buddhist calendar it is 2553 for a little while longer and that's where we're going!). In any case all this has nothing to do with what I'm going to write about, which is HONEY. Full on capitals for this lovely and most amazing medicinal and literally gods-gift-to-us-sweet-nectar! I have been deep in the depths of honey and I think it's going to be a while before I climb out. It has become a bit of an obsession, everywhere I go all I see is honey. I'm packing for our trip in a few hours as I finish writing this, but I needed to write something about honey even though I don't think it will be enough, there is simply never enough honey.

It takes a bee it's whole lifetime to make one small teaspoon of honey.

That statement deserves it own sentence doesn't it? Each time you guzzle down enormous spoonfuls of honey, remember that. One bee's lifetime of work = one teaspoon of honey. And there is NO way (I'm happy to say) to make honey synthetically. We can not replace bees, thank god. Though we try: beware of honey that is fattened up with high fructose corn syrup. I have NO clue why this is done, but I've seen it here and there in honey jars that are fronting for pure honey. The plastic poo bear honey containers are often culprits of this sacrilege.

Bees (and therefore) honey are unfortunately suffering a serious population decline in the last 10 years. And when I say serious, I mean it's really really dire for us! This is no joke in terms of our food supply. Bees not only make honey for us, that honey comes from their ability to pollinate gazillions of crops for us - something we simply can't do on our own. Can you imagine going and individually pollinating each tiny bulb so it could grow up to be a pepper or a piece of fruit? Nope. It's impossible. Well, not entirely, but at least in terms of feeding the WORLD population (which we're struggling to do somehow anyway). When I grew my first chile plants I had them out on our back porch with full sun, plenty of water, and they grew plenty of flowers which were supposed to magically (in my apparently mistaken mind) transform into chiles. Well, the flowers kept dropping, and no chile babies arrived. Finally, I investigated fully and realized that unless a bee came along to do the magic I would have to take my fingers and rub the pollen on each flower and then onto the next flower and so on and so forth. I did do this, and chiles did grow, but if I were to have to do this for all my food (plant based in any case), it would be a full time job and then some. It would be ALL I did every day. So, bees are important. And we need to clearly pay more attention to this because we're losing them at a rapid rate and no one knows why (it is being referred to as "Colony Collapse Disorder"). Here are some articles on this: the Examiner, TIME, The New Yorker, and MSNBC. But not to worry, not all is lost as it seems we are becoming more aware every day and I have faith in us and our honey.

There are over 20,000 species of bees worldwide. And often a bee feeds on a specific type of flower, lending the honey it makes the taste of where it fed. This fact still amazes me to no end and I have begun collecting honey from every nook and cranny of the world I get to go to and find honey! No one honey is the same. I recently bought some chestnut honey from the farmers market in Chicago, honey made from a chestnut orchard and the bees that fed there...it was delectable. Silky, nutty, sweet. Bees have become quite prolific thanks to our need for them, there are now people who "rent" out their bees by travelling around in trucks full of hives and letting their bees out to pollinate certain crops. Almonds in particular are very dependent on bee pollination. I could write many paragraphs (and probably books) just on the pollination and the business thereof of bees, but let's get to the medicine.

Honey is incredibly healing. The first time I learned about this was when I was in Cuba and learning from two men who kept a medicinal herb garden there. They said you could take one tablespoon of honey on it's own (not during or before meals) to boost your immunity or for weight loss. Honey also works on harmonizing the liver (TCM term here), neutralizing toxins, and relieving pain (source: P. Pitchford, "Healing With Whole Foods"). And that's not it, there's more! Honey soothes a dry throat and cough, can treat hyptertension, and constipation. It can even be applied on a wound thanks to it's anti bacterial effect. Honey never goes bad. It can sit in a jar at room temperature literally for CENTURIES. Using raw honey is more beneficial and less sugary than the heated type. However, they warn that it's not always safe to feed this to babies (i.e. the raw kind). 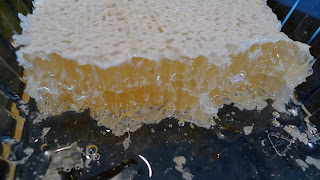 While I was learning about honey I read a wonderful book by Piers Moore Ede called "Honey and Dust, Travels in Search of Sweetness". Piers travels the world in search of honey after suffering a terrible accident and in the process of his recovery falls in love with this sweet nectar. His book is a tantalizing journey around the world which will make you want to do exactly the same thing! Each time I picked it up, I would go right back to the cupboard and root around for a teaspoon (and lifetimes work of a bee!) of honey. My favorite as of late is taking a spoonful of honey comb, which you then slowly chew and let the honey gradually seep into your mouth while you keep rolling the comb around until you've juiced every last bit of honey out. It's like a honey gum but better.


I've noticed bees and honey everywhere now, real bees, bee logos, bee products, honey, and recently, honey liqueur from Germany. It's rather strong at 35% proof but you could certainly use it to mix into a holiday drink. Maybe a little honey liqueur on the rocks, with a splash of lemon, some cinnamon, some orange peel? You decide. 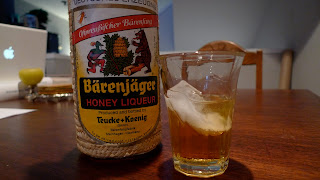 I almost always make my salad dressing with honey: 1 tbspn of honey, some vinegar (apple cider, balsamic, rice, it depends), salt and pepper, dijon mustard, crushed garlic, olive oil. Honey and sesame glazed chicken is lovely too. Drizzle the honey over a piece of chicken you've crusted with sesame seeds and broil. Baklava! You simply can't go on without eating baklava once in a while. The list of what you can do with honey is endless, it just goes on and on.

And with that, I will leave you because I'm down to the wire packing. I just enjoyed a teaspoon of the chestnut honey and hopefully I'll be coming home with even more honey from where I'm going! May 2010 be as sweet as what the bees give us.

Hey Nicole, I loved this post! I am a huge fan of honey, which in Russia is used for everything and anything culinary and medicinal. I recently also wrote about honey in a newsletter, believe it or not, also for the new year - the Jewish new year, where it is the tradition to consume apples and honey for a sweet new year. So it seems such a universal thing, it's just so lovely. Let's hope the bees stay around for the sake of everyone involved! Anyway, loved all the indept info and the scientific bend of it! Sweet New Year and sweet travels :)

You may try this herbal candy, which is pretty popular in asia~~
It works well on my sore throat!
ninjiom.50webs.com

Hi Margarita, please link us to your article here, I would love to read it! I brought back honey from France and Thailand and my cupboard is starting to become a honey factory!