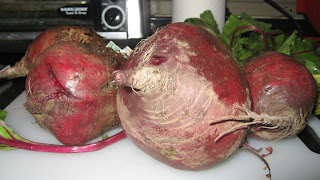 It wasn't a nutrition class or a teacher or even a chef who truly made me lust for beets, but rather the writer Tom Robbins in his book about the quest for immortality in Jitterbug Perfume. I read this wonderful book at some point during college and while it's a great story, what I really took away from it was the image of a beet as it had come alive in all it's deep burgundy glory. Before I delve into how to love and use a beet I'll show you the opening lines to the book, because in all honesty I can only hope to say it as eloquently and sensually as Mr. Robbins:

"The beet is the most intense of vegetables. The radish, admittedly, is more feverish, but the fire of the radish is a cold, a fire of discontent not of passion. Tomatoes are lusty enough, but there runs through tomatoes an undercurrent of frivolity. Beets are deadly serious.

The beet is the melancholy vegetable, the one most willing to suffer. You can't squeeze blood out of a turnip....

The beet is the murderer returned to he scene of the crime. The beet is what happens when the cherry finishes with the carrot. The beet is the ancient ancestor of the autumn moon, bearded, burried, all but fossilized; the dark green sails of the grounded moon-boat stitched with veins of primordial plasma; the kite string that once connected the moon to the Earth now a muddy whisker drilling desperately for rubies. "

Aphrodite, goddess of love, is also the beetroot goddess and it was this link that led many to eat beets in order to obtain beauty such as hers. There is a myth that if a man and woman eat from the same beet, they will fall in love (I can attest to it, ask my husband). As you will see the next time you buy a beet it is the same shape, size, and color as your heart and thus it is inextricably linked to it. And just one more quote here, an old Ukranian proverb states (also from Jitterbug Perfume) "A tale that begins with the beet will end with the devil". Aaaahhh....does that not make you want to play with the beet?

Beets have been used medicinally throughout the world as purifying and nourishing for the blood and heart. This goes for TCM as well, beets are recommended to women during their menstrual cycles and post-partum. Beets are also very good for moistening the intestines in cases of constipation, in particular when someone is weak or possibly anemic. In Africa, beets are used to counter cyanide poisoning. The beet is high in oxalic acid and can inhibit calcium metabolism so do not rush out and buy TONS of beets and only eat beets forever to be beautiful and have plentiful blood! Rather, eating beets a few times a week or for women, when the time calls for it eating them a bit more than that. There is a rather crude but necessary side note here, when eating beets do not panic if you see them twice. Let me get slightly more specific, they are as red going in as they are going out. I often wonder if this is what Tom Robbins meant when he said beets were "the murderer returned to the scene of the crime"...

There are many ways to cook with beets and many of you have likely had borscht, the Eastern European beetroot soup which is cooked in many different ways but always with beetroot. Now that it is spring/maybe summer (you never know in Chicago), I like to make a cold beet soup. If you're not a cold soup person then you may not love this, but if you're a fan of vichyssoise or gazpacho then this is right up your alley. I don't eat this soup in the winter except for when there is an occasional craving as it's too cold in the winter to eat cold soup, and therefore bad for the digestion.

So, without further ado, here is the recipe with pictures. 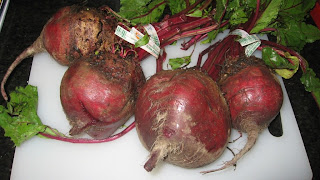 1. Cut off the beet stems (which you can cook as well - they are high in beta-carotene)

2. Wrap the beets in tin foil individually or in one large packet if you so wish, and place in an oven at 400 degrees fahrenheit for approx. 45 mins to an hour. You will need to test by poking the beet with a knife so that it is easily pierceable.

3. Set aside and let the beets cool with the tinfoil unwrapped, like so: 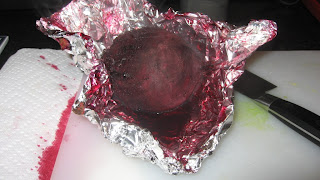 4. Once the beets have cooled, cut off the rough skin (your hands and nails will likely become stained, temporarily) and chop into semi large squares. 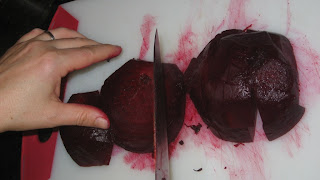 5. Mince up shallots or garlic (it depends on how strong a kick you want) to place in a blender with your beets. I used shallots this time (approx. 4-5) but garlic is lovely as well for a stronger bite (approx. 1-2 cloves). 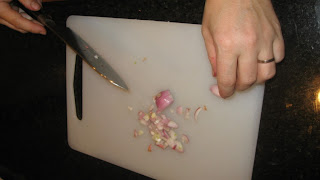 6. Place the beets, the shallots, a container of greek yogurt, sea salt (to taste) , white pepper (also to taste), a tbspn of white wine vinegar, drizzle olive oil, and about a cup of water. You can add salt and pepper according to your taste but I would start with a tspn of pepper and a half a tbspn of salt. Likewise with the water, I only added a cup because I like the soup thick and chunky, but you can add more if you want it more liquidy (and you will need to add more salt). This goes for the yogurt too, more creamy=more yogurt! This is how I cook, little by little, tasting along the way. 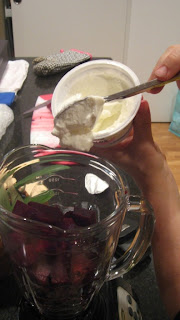 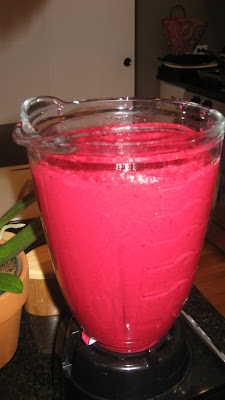 7. Liquify that puppy so it's blended well and taste IT, then add whatever you want more of as I said in #6. I like to place the soup after being blended in the fridge for an hour so it chills a bit more. Then serve with a garnish of minced chives, a sprinkle of coarse sea salt and dance with the devil! 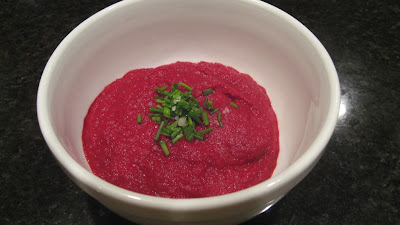 If you want to have a heartier soup you can add cubed avocados and it gives it an extra creaminess and flavor. 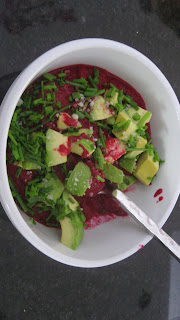 The color of this is AMAZING! Have you tried pickled beets? You know I HAD to ask!
picklefreak.com

Ha... yes, you did have to ask being a pickle addict, and I'm with you on that being a self professed pickle maniac myself. Yes, I have had them pickled and they're deeelish. I roast them the same way as above and I let them sit overnight (cubed) with some sea salt, vinegar (I like balsamic), bit o' olive oil, pepper, done. Tasty. I like them even more pickled as well in Eastern European cuisine where they serve them on the side and they're crunchy (less roasting or perhaps they do them raw? do you know?).

this is awesome Nicole!
My ayurveda doctor speaks highly of beets, carrots and pumpkin. Beets are liver detox food.
One of the reasons why borsch is highly popular as the best anti - hangover item in your kitchen... there you go. GO BEETS!!!

Muchos besos de Madrid...
I owe you a noce long email, and by the way, this website rocks! Just like you, my lady...

I book marked your recipe! Lately I discovered the taste of red beets, not like I never eaten it before but rather it wasn't an interesting veggie since I didn't read up about it. I used lately red beets in a home remedy called 'fire cider' or others name it master tonic or even cyclone tonic for flus and colds. Then I discovered I like beets better raw than cooked. I grate red beets and carrots add onion oil and vinegar incl. salt and pepper and voila my savory and very moist dinner. Your cold soup recipe sounds delish and I will def. make some this summer. Thanks for sharing your recipes, I love your blog!!

Enthusiastic words written in this blog helped me to enhance my skills as well as helped me to know how I can help myself on my own. I am really glad to come at this platform.
หลอด ไฟ