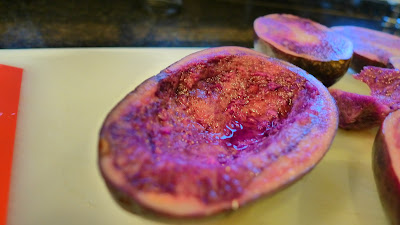 As the 4th of July weekend approaches (or for those not in the U.S., perhaps a warm weekend of barbecues?), consider the blue potato. Some time ago I wrote about the potato in all it's simple glory. Potatoes are neutral and sweet in the Chinese Medicine world. They are also mildly diuretic, tonify (boost) the digestive function, moisten the intestines, and contain easily accessible carbohydrates when it's difficult for your body to break down food. A blue potato has the additional benefits of being a blood tonic according to TCM nutrition. From a biomedical nutrition perspective they are high in anthocyanins, making them strong antioxidants and anti-inflammatories, 75% of which is retained after baking. 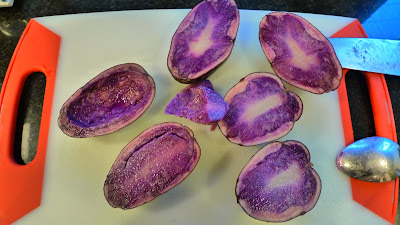 While potatoes are a root/Winter crop, you can find them year round as a staple as they store well in cool, dark, dry spaces. They are also an excellent party food as you can produce a variety of dishes using them. Blue potatoes in particular will spruce up a plate with their radiant color and your guests will thank you with a happy digestion after devouring them. 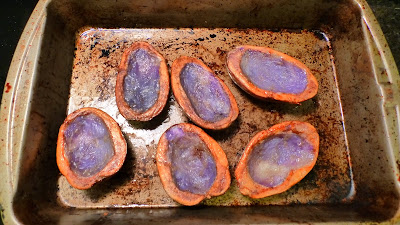 I often long for baked potato skins but rarely do I find them made in a way that seems tasty or "healthy" enough (they're usually packed with fake yellow cheese, synthetic bacon bits, and loaded with sour cream) so I thought I'd reinvent the baked potato skin for this 4th of July weekend as a party treat. It's simple. It's delicious. It's got great medicinal value.

1. Cut potatoes in half length wise. Scoop out about 1/2 of center with a spoon (I like to leave a substantial amount of potato so it's not just the skin as the name indicates, but scoop out enough to be able to fill it with a bit of stuffing).
2. Lightly grease a pyrex or baking pan with grapeseed oil. Place skins face (cut side) down. Bake at 400 degrees F for 15 mins until just barely soft (check with a knife by piercing), flip over face up and bake another 5 mins. This cooking time is indicated for medium sized blue potatoes, not large, adjust if they are smaller or larger.
3. Take out and fill with crisped and minced bacon, 1 thin slice of aged goat gouda which covers the holed center. Place back in oven at 350 degrees F for another 5 mins or until cheese melts.
4. Take out and let cool. Add a dollop of Greek yogurt and a sprinkle of scallions or chives with a smattering of red sea salt. If you can't get your hands on that, just use plain sea salt, the purpose of this is more for the red, white & blue effect. 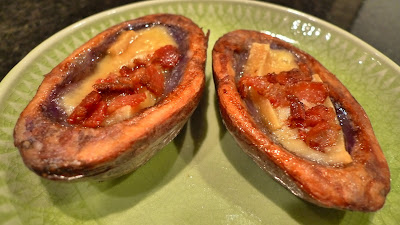