Food as Medicine I

There have been so many medicinal food tidbits that I've wanted to share that I thought a round up of the recent gatherings would be a nice kick off for February (mid-February in any case!). So without further ado, five of my favorites for this month... 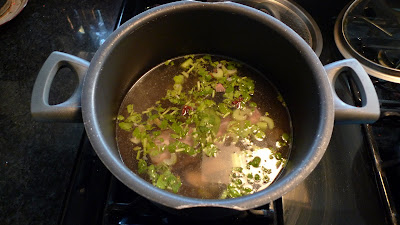 #1. Pictured above is some ridiculously delicious beef stock. Do you make your own or buy it? Do you buy the little salty cubes of bouillon? Well, making your own stock is such a simple, tasty, and incredibly healing mechanism of food intake that I hope you start soon if you haven't already. It's easy to make and you can freeze batches of it for future use in soups, sauces, stews, and just simply as stock for healing purposes. In Chinese Medicine making a stock out of bones (and marrow) is thought to increase the function of the kidney and all the physiological aspects that are associated with it (i.e. brain function, growth, bone strength, fertility, urinary function). From the Western nutritional perspective, bone marrow is particularly high in DHA which is an omega 3 fatty acid that contributes to the development of the brain and eyes, as well as other growth functions in children. DHA is now synthesized (primarily from micro algae) and sold in capsules (much like every vitamin and mineral out there) but it is best absorbed and used by the body when ingested in it's natural form. Low levels of DHA are associated with Alzheimer's disease (meaning, there is a lack of DHA). When I prescribe stock to my patients it is usually for : blood deficiency (which can manifest as anemia, loss of vision, dry skin, scanty menses, fatigue), post partum, post surgical, chronic fatigue, low immunity, poor digestion, for fertility, and just for general good health. 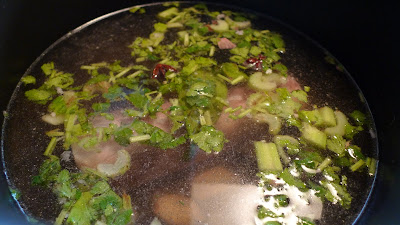 Another fantastic example of where East meets West in terms of nutrition theory (besides the kidney function and DHA mentioned above) is demonstrated very well here in a TED talk by Heribert Watzke where he goes into the link between human brain growth historically and eating cooked nourishing foods (such as stock). He says what separates us from the other primates is primarily this : cooked food. I think stock plays a great role in this theory.

I like to buy short and long (beef) bones from my local farmers market and make a beef stock, but I also make chicken stock (usually using the leftover chicken carcass after making a roast chicken), and fish stock (I buy a large fish head from the fish monger). You can also make pork, lamb, lobster (using the shells), and other bone based stock. Make a stock that works for your palate and cooking needs.

1. Sear the bones in a little bit of oil until browned on all sides, add approximately 2 liters of water along with whole peeled onion, celery stalks, peeled and roughly chopped carrots, 2 stems of parsley with leaves (or substitute with correander/cilantro), 2 tablespoons sea salt, 1 teaspoon pepper (adjust this to taste).
2. Boil for 3-4 hours (or up to 6-8 if you have the time - you will need to add little bits of water as it gets more concentrated, without diluting the flavor too much) until the stock takes on an amber hue. Let it cool and separate into containers for freezing after straining out the bones and vegetables. 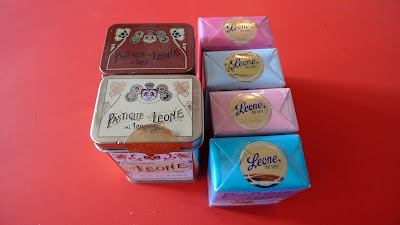 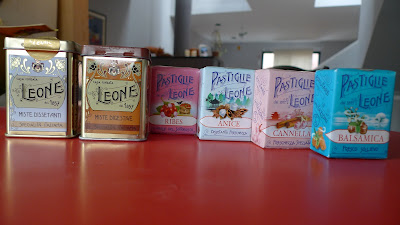 #2. Whilst in Turin, Italy back in October I ran across these fabulous little boxes of digestif pastilles. I love that there is a culture of helping your digestion in Italy. In fact, there has always been one everywhere in the world but recently we've been losing touch with this culinary ritual. One of the most important things you can do for yourself is to eat warm nourishing foods as your digestive function is like a furnace according to Chinese Medicine. Another way is to eat or drink something after your meal which is not only tasty but medicinal such as a digestif liqueur or a digestif pastille much like the ones shown above. In Chinese Medicine licorice root and anise are both used for these purposes, both of which are featured flavors in these pastilles. But they also have interesting other flavors such as balsamica, cinnamon (cannella), and currant (ribes). 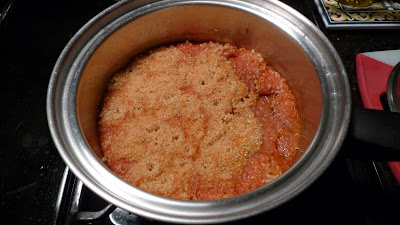 #3. I know the health food brigade has been all over this one for some time (and in the Andean highlands where it is a food staple from Incan times, even longer!), but for whatever reason I didn't take to quinoa right away. Perhaps I didn't understand it well enough. However in December while I was in Colombia I had an amazing arugula, parsley, avocado, and quinoa salad paired with a succulent and crispy roast chicken, and I was in love. Quinoa has a bitter quality which is excellent for tonifying (i.e. treating) the heart according to Chinese Medicine. If you are finding yourself a little anxious, have heart palpitations, or are easily excitable, perhaps quinoa is a worthwhile exploration for you. It is also a starch that is high in protein and won't weigh you down so much when you're on the go during the day or when you want to sleep light and happy at night. Quinoa has all 9 essential amino acids and is considered a complete protein, therefore it is an excellent food to add into your diet if you are vegetarian. In addition, it's high magnesium content helps to relax your muscles and enhance blood flow, especially if you are tense, stressed, and your liver is suffering. In Chinese Medicine, the liver is the receptacle organ for stress and it is also interesting to note that foods high in magnesium tend to be foods which correlate to the liver, primarily dark leafy greens (quinoa is a relative of swiss chard). The key to cooking quinoa is to do so until the little tails uncurl from the grain and you are left with a sweet, nutty, and pliant grain. I like to cook it with beef stock and a little tomato paste to lend it more umami flavor.

1. Heat up a tablespoon of olive oil in a pot and gently stir 1 cup of quinoa until coated and lightly browned, add 2 cups of beef stock and 1 tablespoon of tomato paste. Bring to a simmer and cook for approximately 20 minutes, you can see it is done when it puffs up and the quinoa tail comes unfurled. Salt and pepper to taste and serve over a salad or as your starchy side to a protein.

*for more flavor saute 1/2 and onion until soft before adding the quinoa. 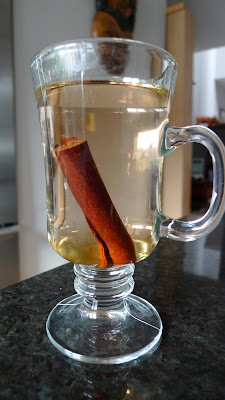 #4. Cinammon, love it or hate it it's a very powerful food/spice to use as medicine. You can use it simply to make a tea (pictured above) or you can add it to stocks and soups to lend a spicy roundness to the flavor. In Chinese Medicine cinnamon bark, or Gui Zhi, is used to warm and unblock. It is also good for beginning stage colds, joint pain, menstrual irregularities, and other pains (in particular those worsened by the cold).

1. Boil water and let cinnamon stick steep until tea is a delicate beige. Drink and then reuse all day up to 5 times or when there is no more flavor. 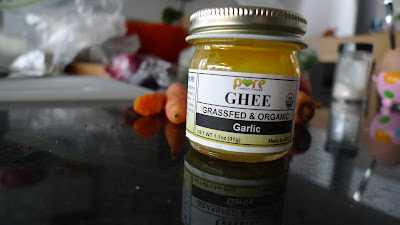 #5. And last but not least, ghee (clarified butter). A product which I came across some time ago but have only just now circled back to is the ghee (pictured above and below) produced from grassfed cows by Pure Indian Foods. Ghee has been used in Ayurvedic Medicine for thousands of years and is considered a very powerful medicinal food that can be used internally and externally. It is butter without the milk solids (thus clarified butter). Ghee is used to heal skin disorders, gastrointestinal issues, and neurological conditions. The only time to use ghee with caution is in cases of obesity and/or an abundance of phlegm. In which case you would use it sparingly. You can use ghee much like any cooking oil or butter. If you're lactose intolerant and were looking for a butter alternative, ghee is your friend. I often recommend it to patients who have high anxiety or neurological conditions as it is grounding and soothing for the nervous system. It also happens to taste good and has a high burning point unlike olive oil which can go rancid if you use it to fry things. 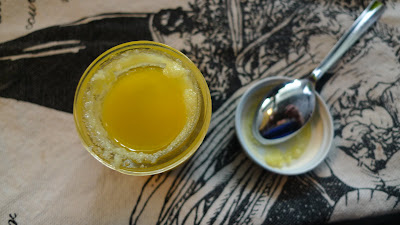 btw, bird nest (www.geocities.jp/hongkong_bird_nest/index_e.htm) is made up of about 58% soluable proteins...the highest amoung all food and even synetic protein powders