Umami : The Flavor of Satisfaction 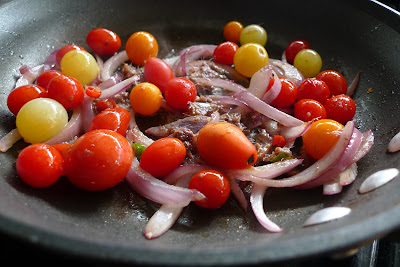 Umami is a word borrowed from the Japanese (thank you, Japan!) meant to describe a flavor that falls somewhere between a savory/salty, sometimes sour, with often times a tinge of sweet taste. Umami is the flavor of satisfaction according to the area of the brain that is initiated upon ingesting it. Some of the foods which contain the umami flavor are (but not limited to) : soy sauce, seaweed, fish sauce, bacon (!), fish or meat stock, umeboshi plums, oysters, truffles, parmesan, anchovies, lobsters, crab, shrimp, and ripe tomatoes. Umami has in fact been identified and studied, that is how important it is as a flavor! In 1908 Kikunae Ikeda, a Japanese chemist found that glutamate was the common compound in all the above mentioned foods that produced the taste sensation of umami. Glutamic acid is one of the 20 non essential aminio acids. Kikunae Ikeda isolated this compound in the foods with an umami flavor (also referred to as the fifth taste by some) and patented monosodium glutamate (MSG) to mimic it. 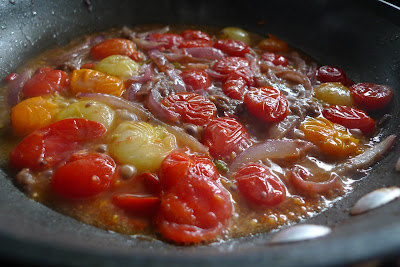 What is interesting about umami from the perspective of medicinal cooking where you are using your food as medicine is the element of satisfaction that it emits. If you are one of those people who "can't get no satisfaction" from their food, maybe a little umami is missing to help curb cravings or halt overeating? Chinese Medicine has broken down tastes and flavors according to the five elements : sour, salty, bitter, spicy, and sweet. Four of those are considered the primary tastes, all except spicy, and then umami is the "fifth taste". Umami would be a combination of those four elements/tastes and it is through that approach to eating that you are able to balance your palate and your body's needs. 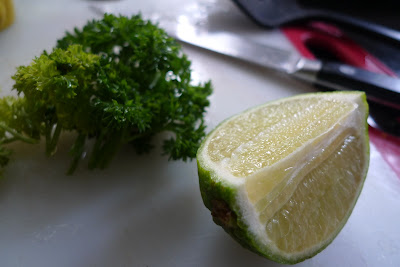 Umami has gotten a lot of press in the last few years in the U.S., so much so that a Umami Information Center was created in NYC just for this flavor! There's also an Umami Food and Art Festival. All you have to do is google umami and you will stumble upon article after article in publications such as the New York Times, The New Yorker, Saveur, Food & Wine, and on and on. Clearly, this is an exciting concept that has finally arrived in the West, even though everyone was already eating it all over the world and all that was needed was a word and the framework to reference it. 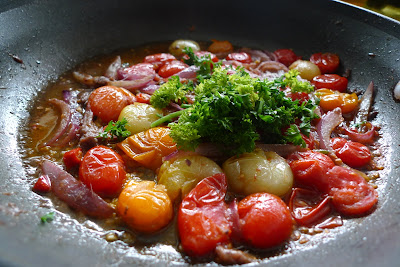 Recently, I had a craving for an umami-rich lunch, just for me and my happy self. Using four ingredients which are full of umami naturally, I constructed an Umami Pasta with : anchovies, cherry tomatoes, fish sauce, and parmesan (umami ingredients) along with lime, parlsey, red onions, Thai bird chiles, and olive oil.

(serves ONE, so if you want to make it to share, double the ingredients)

1. Slice moon slices of half a red onion and begin to gently saute in olive oil from the tin of anchovies. Add 3 minced Thai bird chiles. Once the onions begin to soften, add the whole can of anchovies.
2. Once the anchovies begin to break apart and get pasty, add the whole cherry tomatoes. Cook them for a few minutes until you see them begin to get softer at which point you will take the spatula and smash each one flat without stirring too much, you want to keep the tomatoes intact but flattened. They become pools of flavor.
3. Drizzle 1 tbspn of fish sauce and squeeze 3/4's of a lime over everything, this should give it enough body and juice to make it saucy. Let it simmer on a low heat for a few more minutes so it melds.
4. Add coarsely chopped parsley in the last minute of cooking so that it softens and cooks in just a little bit without losing the crisp texture.
5. Pour sauce over pasta and then grate fresh parmesan. Enjoy the umami bomb! 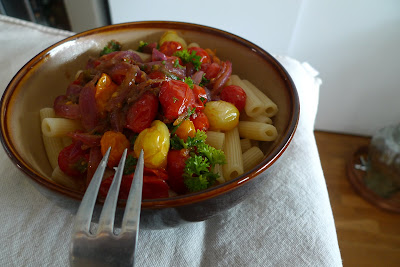 Very interesting! I always have the unsatisfied feeling and kept eating trying to find the taste I am looking for but could not. I will keep Umami logic in mind so that I don't overeat! Thank you for a great info.

I first hear of Umami from my hubby. He is a food lover and a good cook himself. The ingredients you use are umami indeed!