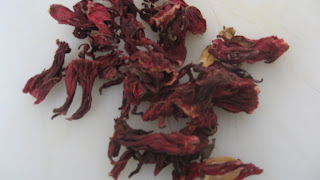 The flower Hibiscus sabdariffa, also known as flor de Jamaica in Spanish, is not only delicious but also incredibly medicinally beneficial. I drank this flower tea growing up in Thailand as my mother would brew it often when she found out you could purchase it there, having already been exposed to it in Colombia. I vaguely recall the tea as being "good for you" (how often we hear that nowadays), but the reason for it being good for me did not stick in my mind, perhaps because hyptertension, high cholesterol, and water retention are not necessarily something a 15 year old thinks about. Before it was just a delicious chilled rose-colored tea water with a hint of cranberry'esque tartness, now it has taken on new dimensions as I continue to cultivate my knowledge of food as medicine.

Thailand and China are in fact the major producers of hibiscus so it is no wonder I drank it often when I lived in Bangkok. It is thought to be that Thailand produces better quality hibiscus than China, but that Sudan has the best variety, though it's exports are small and rare because of production difficulties. Malaysia became a large producer as well in the 1990's.

The uses for hibiscus are varied as it is used through the world in Asia, Africa, North America, Europe, and South and Latin America. In the U.S. they have primarily toted it as being a drink high in vitamin C. In Thailand they recommend it for the treatment of high cholesterol and hypertension. In South America it is considered good for not only it's high vitamin C properties but also as a mild diuretic and laxative. In Sudan it is used as a cough suppressant and the heated green leaves of the flower are used for cracks and boils on the feet. There are so many uses for this beautiful flower, that I am likely missing some, but will keep this post updated if I learn of more.

While I have been referring to it as flor de Jamaica since I bought it in a Mexican market, you can also find it under the following names (I obtained this information from Wikipedia):

"The roselle is known as the rosella or rosella fruit in Australia. It is also known as meśta/meshta on the Indian subcontinent, Tengamora in Assam, Gongura in Telugu,chin baung in Myanmar, กระเจี๊ยบ'krajeab in Thailand, bissap in Senegal, Mali, Burkina Faso, Benin and Niger, the Congo and France, dah or dah bleni in other parts of Mali, wonjo in the Gambia, zobo in Nigeria (the Yorubas in Nigeria call the white variety Isapa (pronounced Ishapa)), karkade (كركديه; IPA: ['karkade]) in Egypt, Saudi Arabia, and Sudan, omutete in Namibia, sorrel in the Caribbean and in Latin America, Flor de Jamaica in Mexico, Saril in Panama, rosela in Indonesia, asam paya or asam susur in Malaysia. In Chinese it is 洛神花 (Luo Shen Hua)"

There are a few different ways to make hibiscus tea, you can boil and steep the flowers for 20 minutes or you can soak them in room temperature water for 2-4 hours (depending on how strong you want it). I chose to do the boil and steep for 20 minutes and the tea turned out delicious, I added 1 large tbspn of rock sugar to sweeten it and I served each glass with a sprig of mint leaf, delectable! Here are the pictures: 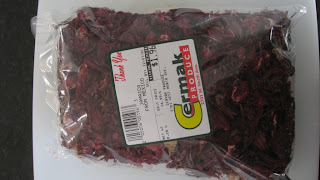 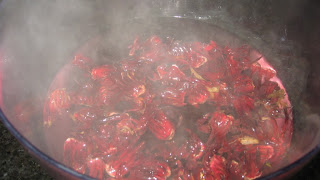 The approx. measurement is 1/2 cup flowers to 4 cups of water, but you can play it with according to taste. 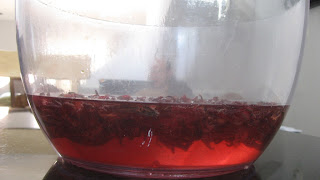 Let the flowers steep for 20 minutes. 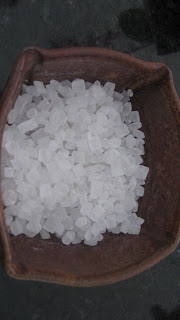 I used rock sugar which I find to be less "sugary" and more nourshingly sweet rather than sickeningly sweet. 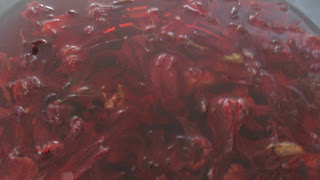 The dried flowers expland and turn back into vibrant flowers in the water. 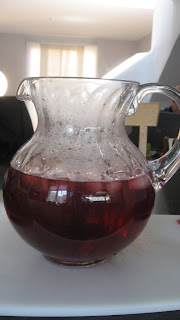 I put the steeped flower juice into a pitcher so I can keep it in the fridge nice and chilled and ready to drink whenever I want. 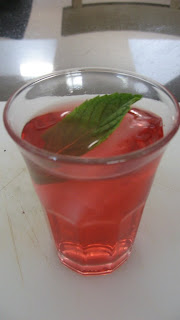 A glass of chilled flor de Jamaica juice with a sprig of mint in it.

If you were to primarily use this to treat hypertension, high cholesterol, cystitis, or water retention, you would drink it every day. Because it is a mild diuretic, there aren't the normal dangers associated with diuretics. However, I always recommend that people monitor themselves whenever using anything on a daily basis and it is good to take "medical breaks" from frequent use of any herb or medicinal food.

As a side note, while researching this flower I came across a recipe for Sorrel Punch, which is the fun and alcohol-laden Carribbean version of flor de Jamaica (they just like to have more fun in the Carribbean!). Here is a general recipe (which I have not tried yet but hopefully will attempt this summer), I got it from the blogger eCurry.com:

To make the Sorrel Punch:

In a large, heat-proof bowl, combine the sorrel, the ginger, the cinnamon stick the cloves and the sugar. Set aside.

Bring the water to a boil and pour it over the sorrel, spices and sugar. Allow the mixture to cool. Cover the bowl and let and let the punch steep for two days.

Strain the mixture through a fine cheesecloth and return the liquid to the bowl.

Stir in the rum. Cover once more and allow the mixture to stand for two more days.

Strain the punch a final time and place it in the refrigerator to chill.

Serve the Sorrel Punch over glasses full of crushed ice, with garnishes of lemon, lime and orange slices. (During the holidays, this is accompanied with a slice of Fruit Cake)


**The lovely hibiscus flower has made it into the news (8.20.2009) as the New York Times displays all the edible flowers being used in cocktails.
Posted by The Spice Doc at Saturday, May 16, 2009

What a fascinating drink! I love trying new things and you have explained this herb and its use here wonderfully, plus you've taken beautiful pictures. I drink sun tea during the summer months, and often brew green or white teas for a change of pace. This would be a wonderful alternative and healthful as well. Thanks for the wonderful recipe and lesson!

My mom always adds dried orange peels to her Sorrel. Since I've just started my chinese medicine studies, I thought I'd try to find the therapeutic qualities of this as it's a big hit around our house. I guess she'll have to leave out the rum & wine!