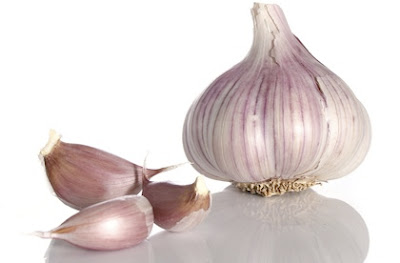 If there is one ingredient that I'll expound upon that everyone has heard something or other about, it's garlic. Garlic is good for you, you have probably heard that statement individually a million times over. Well, it's all true. It is "good" for you! Not only is it good for you but it has a long history the world over, you can find it in virtually every culture and in folklore galore. Garlic keeps vampires away, afterall. Whilst I was studying my undergraduate degree I wrote a dissertation on the History of Garlic from Antiquity to the Present along with exploring it's medicinal values. I'll just say this, 70 pages was not enough! And neither will this blurb on this blog be enough. But I'll make my best attempt to share the best bits with you here.

First, a bit of the juice on the history of garlic. One of my favorites (note: there are HUNDREDS of stories if not thousands like this), during the 11th century when Denmark was involved in a war with England it was said that the warriors wounded in the stomach were sent to a "witch-doctoress" who fed garlic to the soldiers and then proceeded to smell them to tell which ones had perforated intestines and would die. This was the process of elimination so that she could concentrate on the ones who might survive. While this story is not particularly enticing in terms of garlic's medicinal value, it is certainly telling of it's odiferous capabilities.

Garlic can be traced back as far as 2000 B.C. where it was cultivated in the East and the Chinese used it for medicinal and cooking purposes. The ancient Egyptians held garlic as a deity and even worshipped it. In fact, in Egypt it was so holy at the time that the priests were not allowed to eat it. The slaves who built the pyramids were given cloves of garlic to maintain their strength and health. 6 garlic bulbs were found in the tomb of Tutankhamun. Garlic was nicknamed the "stinking rose" by the Romans and the Greeks and the athletes and soldiers would also eat it much like the Egyptians, to maintain their health. 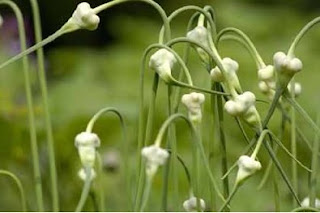 (what garlic looks like when it's in full stinking rose stance and before it's snipped off and landed in a market .. )

Ceremonious piles of garlic were placed in offerings. Hippocrates named garlic as part of his materia medica. Garlic didn't arrive in England until 1540 and by then it was considered part of peasant fare (then again so was caviar and lobster!). It was likely that it became as such because of it's lovely odors, so much so that the King of Castile banned anyone who ate it from getting near him! I could go on and on about the smell, which really doesn't bother me, but after moving from Asia to the U.S. and working in a corporate environment where I heard "Oh, I can't eat garlic before that meeting" more than once, I now fully understand the power of it's aroma. Here is a Shakespeare quote for you to masticate on:

'And, most dear actors, eat no onionis or garlic, for we are to utter sweet breath.'
Shakespeare, A Midsummers Night's Dream 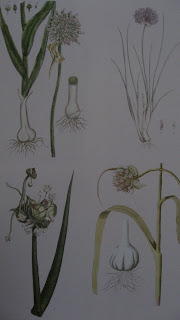 Garlic is part of the Allium species and the Alliaceae (also Liliaceae) family, also in this family and species are the onion, chive, and leek. You can eat garlic fried, pickled, raw, steamed, pretty much any which way you want. And now (drum roll...) onto the medicinal value of garlic. It can be used as an antiseptic, an anti-viral, anti-microbial, anti-bacterial, anti-fungal, digestive, diuretic, as well as in dilating the blood vessels. That pretty much about covers it, it can be used for everything!! As an antiseptic it can be applied directly to a wound as it was in WW I when England was paying as much as a shilling per pound so that it could be mixed with moss and applied to wounds. The most important thing I learned about how to use it medicinally when ingested for any of the above purposes was to crush the garlic and let it sit for 15 minutes so that the enzymatic reactions can take place and alliin is coverted by allinase into allicin, which is the compound that functions as an anti-microbial, anti-fungal, anti-bacterial and anti-viral. You must let it sit for 15 mins after crushing it with the back of your knife, a blunt object (I use the Mongolian garlic crushing rock pictured earlier), the bottom of a bottle, etc. 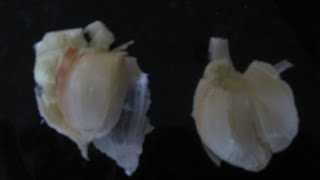 TCM regards garlic as an acrid and warm herb that kills parasites, relieves toxicity (in certain cases of diarrhea, dysentary, consumption, and coughing), as well as being good for preventing seafood poisoning. Garlic shouldn't be used in cases where someone is too weak and is also demonstrating signs of heat, such as a rash, redness, (red) swelling, and some acne. If you want to ask any more questions about it, feel free to post a comment.

As I said, I could pretty much dedicate this blog to garlic, but I'm just here to introduce it a little more so you can play with it if you so wish and in the near future I'll blow this out into a three part series for those that do want to get a little more up close and personal with the stinking rose. Stay tuned for the History of Garlic, The Medicinal Value of Garlic, and Medicinal Recipes for Garlic....

There is a whole entire town in California dedicated to garlic, Gilroy. The Gilroy Garlic Festivial is one of the best food festivals I have been to and you will find people who love and nurture this lovely derivative of the Allium species in ice cream, pizza, raw, pickled, fried, on tshirts, it's everywhere! If you are in California this summer between July 24-26, you might want to check it out:
http://gilroygarlicfestival.com/

In the meantime, crush some garlic and save yourself!
Posted by The Spice Doc at Tuesday, May 05, 2009