The Taste of Medicine 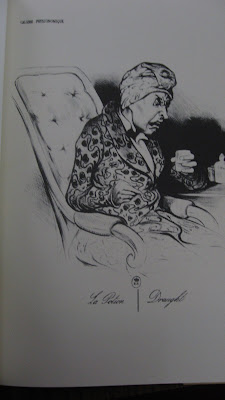 I wanted to share a little treasure with all of you, it's a caricature by the well known Honoré Daumier, who was an artist in the mid 1800's in France that often drew caricatures with political commentary. This one in particular is from a book with Daumier's paintings and caricatures about doctors and medicine. It is a woman taking her poor tasting medicine. I love it because that's what we tend to think of when we have to "take medicine", whether it's pills, some semi bad tasting cough syrup (thus the insanely sweetened cherry flavors they now produce), or even Chinese herbs which I must admit taste rather ... strong. Which is why "eating your medicine" can be so fun and exciting. Not to say you won't have to delve into taking medicine ever again, but it is quite possible that those chances would be greatly reduced by learning to eat certain foods when experiencing a particular condition. In fact, it used to be that everyone knew how to inherently do this in almost every culture. I now rarely see it in terms of specific ingredients, but we are more obsessed with every diet imaginable and it's all rather confusing and diluted after a while. People come in to see me all the time and don't know whether to fast, eat raw, die instead of eating carbs, eat only protein, and so on, and so forth. Anyhow, just a little passionate rant on "why not just eat some garlic for that?"... which will be my next post! Til' then..
Posted by The Spice Doc at Thursday, April 30, 2009