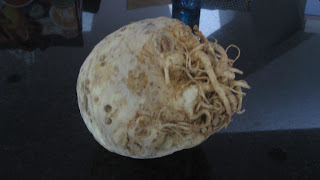 If you are still craving a starch but don't want it to be so heavy like potatoes or pasta now that it's getting warmer out, then celeriac is the answer to all your starchy but light desires. I was introduced to this by a good friend who makes hers with caramelized shallots, roasted celeriac, and roasted parsnips all pureed with some butter, milk, salt and pepper. The first time I had it I was in heaven! As it turns out I've likely had it before then but was unaware of it being celeriac since the French use it often in their cuisine as celerie remoulade (crispy, creamy, & delicious). You can use celeriac raw or cooked, much like daikon radish. It is only 5-6% starch unlike many other root vegetables which are much heartier. Celeriac is an excellent source of magnesium, potassium, vitamin C, and calcium.

Historically, celeriac was used as a medicinal root vegetable known then as selinon by the Greeks, and really grew in popularity in the Middle Ages in Europe. From a TCM perspective it is tonic in nature for your digestion and would be recommended when you have trouble eating heavy foods or are experiencing problems such as diarrhea or gas (in which case you would eat it cooked rather than raw). And, as I mentioned above, if you are just looking for a light starch then this is the answer.

Celeriac does in fact taste like celery as it's name divulges. If you are not into celery, you won't be into celeriac. It is a potato married to a celery. I chose to mash it up one night very simply and serve it with seared scallops and a light salad. Below are the steps I took to do this. I loved it, but if you want it a bit creamier, then I suggest adding roasted parsnips and cream. I kept it light. 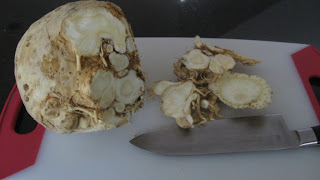 First, slice off the outer knobby edges (you can't peel it, you will have to slice!) 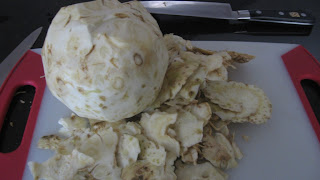 Continue this until the naked white interior is exposed all around. 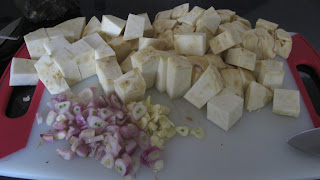 I chopped it up into cubes, mince some garlic and shallots. 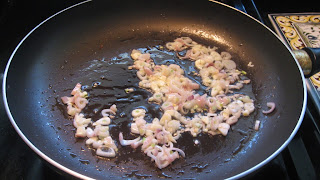 Slowly begin to caramelize the shallots and garlic in olive oil. 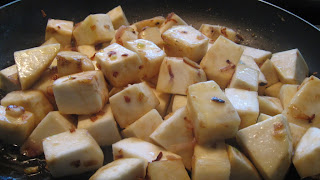 Place the cubed celeriac in the pan and pan fry until it is soft and browned (add butter and olive oil when needed). 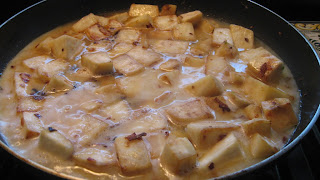 Add water and milk (depends on how creamy you want it) so they continue to cook down until they are soft enough to mash. Add salt and pepper to taste (you can taste at this point). 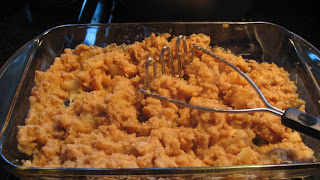 I like Jamie Oliver's take on celerie remoulade:
http://www.jamieoliver.com/recipes/soup-and-salad/ribbon-celeriac-salad

For a wonderful celeriac puree with poached scallop recipe go to:
http://splendidtable.publicradio.org/recipes/main_scallops.html

For a informative and historical overview of celeriac:
http://www.npr.org/templates/story/story.php?storyId=6551175
Posted by The Spice Doc at Tuesday, May 26, 2009

I like it shredded finely with homemade mayonaise and lemon juice or stir-fry with seafood...